Be Someone Day at Pete Nance Boys & Girls Club

Be Someone Day at Pete Nance Boys & Girls Club 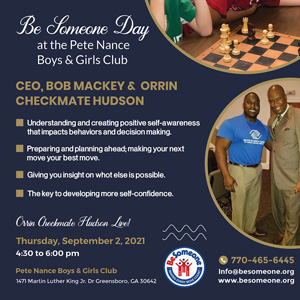 Greensboro, GA — The Pete Nance Boys & Girls Club has invited back Orrin “Checkmate" Hudson, founder and CEO of Be Someone Inc. in Atlanta. The world-class chess champion will be returning to the club at 1471 MLK Jr., Drive, on Sept. 2 with his life-sized chess board to once again teach kids strategies for success through the game of chess.

Hudson has the know-how to inspire. As a high school student in inner city Birmingham, Alabama, he was on a dead end path. He was in a gang, involved in petty crime, moving from foster home to foster home. His grades were not good. He never thought beyond today. That all changed when a teacher introduced him to chess.

Hudson was skeptical but sat down in front of a chess board for the first time. Checkers was one thing, chess another. To make a long story short, he not only learned the game but embraced it. He began to see that the principles of chess apply to life. For the first time, he started to understand he had a brain and God intended him to use it for good, not bad.

Hudson tells all who listen that chess not only changed his life, it saved it. "I was destined for failure, that's what I learned to expect and accept," he remembers. "But something clicked. I realized the moves on the chess board were like decisions in real life. I started to understand there were consequences for my actions. My teacher told me I could be a success in life if I thought before I acted."

Hudson has enjoyed a great deal of success having served in the U.S. Air Force, as an Alabama State Trooper, and as a successful businessman in his hometown. But he knew something was missing in his life, he just didn’t know what. He always felt he had a debt to repay to his high school teacher who showed him the path to a better life.

In 2001, Hudson, spurred to action by a horrific crime committed by young people, discovered his calling. It was then he decided it was time to give back, to possibly save others from destroying their lives and the lives of others as well.

He founded the organization Be Someone Inc. that uses chess to teach a multitude of life lessons such as "head up, pants up, grades up, never give up" and "talk it out, don't shoot it out." Hudson says his program has taught more than 88,000 young people to be "winners, not losers, givers, not takers."

Mr. Bob Mackey, CEO of the Boys & Girls Clubs of North Central Georgia, said having Hudson revisit Pete Nance to keep the training he did a few months ago alive, is “absolutely exciting.” Mackey added, "Not only will Orrin teach our young people the principles of chess but he will serve as a mentor as he explains the life lessons the game teaches. Orrin relates to young people, he understands their lives and many of the problems they are dealing with. His track record is clear, when Orrin speaks, kids listen."

Hudson will visit the Pete Nance center September 2, 4:30 to 6 p.m. The first African American to win the Birmingham city chess championship, Hudson, has been honored and recognized by a multitude of local and national organizations and media outlets for his effective program, He loves what he does because he knows it is making a difference. "Kids love this game, a game many adults shun because of its perceived complexities," he says with enthusiasm, "because it opens doors for them. I am just one example."