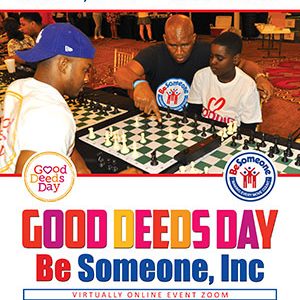 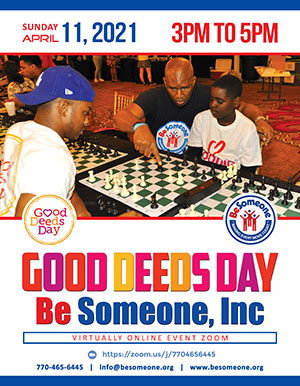 From 3pm until 5pm

Nationwide — In celebration of this year’s Good Deeds Day, Orrin “Checkmate” Hudson, a national mentor and award-winning community activist, is offering a free online training session via Zoom on Sunday, April 11, from 3pm to 5pm EST. The event will open to both youth and adults, age 8 to 88. As an international chess champion, Orrin will be giving away free strategies to help both young ones and older ones alike to clearly understand that there are consequences for every move they make in life.

Hudson, who has been featured in People Magazine, on the cover of Chess Life Magazine, and on Good Morning America, is recognized around the world for his mentoring work in the community via his Atlanta-based nonprofit called Be Someone. During his free virtual training, he will use a giant chessboard to teach strategies on problem-solving and success.

Once an at-risk youth himself who followed a path of personal hardship and heartache, Orrin has been a champion for the community for more than 20 years. He says his training is “designed to provide constructive tools for life.”

“The game of chess changed my life,” says Hudson. “Now, I use it to change the lives of others – especially young people.”

Hudson has been dubbed the “Pied Piper of Positivity” by CNN for coaching his students to a statewide chess championship and three citywide chess championships. His program has served 65,000 students since 2000. He has even been awarded the George H.W. Bush Points Of Lights Award and the prestigious FBI Director’s Community Leader Award.

Those interested in joining his upcoming free event can use the following link to log on Zoom on April 11th at 3pm EST: https://zoom.us/j/7704656445